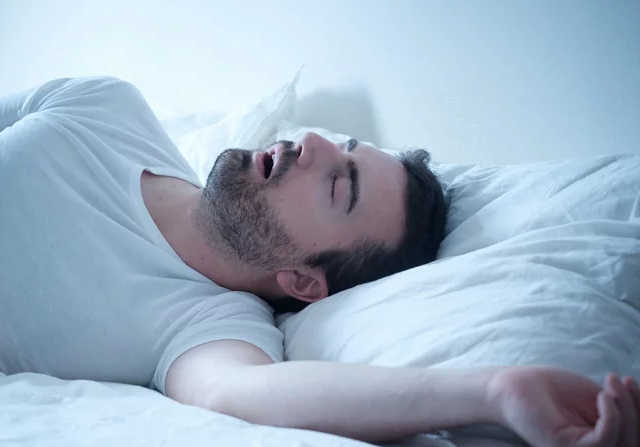 Sleep apnea is a common sleep disorder in which an individual’s breathing repeatedly stops and starts during sleep. Symptoms include daytime sleepiness, loud snoring, and restless sleep. If you snore loudly and feel tired even after a full night’s sleep, you might have sleep apnea.

There are two types of sleep apnea:

1. Obstructive sleep apnea (OSA): The more common of the two forms of apnea, it is caused by a blockage of the airway, usually when the soft tissue in the back of the throat collapses during sleep.

2. Central sleep apnea: Unlike OSA, the airway is not blocked, but the brain fails to signal the muscles to breathe, due to instability in the respiratory control center.

There are a number of factors that increase risk, including having a small upper airway (or large tongue, tonsils or uvula), being overweight, having a recessed chin, small jaw or a large overbite, a large neck size (17 inches or greater in a man, or 16 inches or greater in a woman), smoking and alcohol use, being age 40 or older. Also, OSA seems to run in some families, suggesting a possible genetic basis.

A person’s lifestyle is usually a significant contributory factor to the Sleep Apnea condition. Hence making lifestyle changes such as losing weight, reducing alcohol consumption, sleeping on your side all can help improve the condition. Your doctor or a dentist may also prescribe a CPAP machine (Continuous Positive Airway Pressure) to help deliver air through a mask to prevent the airway from closing during your sleep.

Dentists may also recommend a mouth shield-like device called a mandibular advancement device. These devices will hold your jaw and tongue forward to create space at the back of the throat to help with breathing when you sleep. Surgery may also be an option if the problem is due to an unusual neck structure.